Hundreds of Canada Geese often hang out in the Connecticut River, in the waters of the Retreat Meadows and the West River, and in the nearby pasture and cornfield. They did so through most of September, then disappeared. Now they are coming back.

Once in a while among those hundreds of Canada Geese which hang out in the Brattleboro waters, there will be a different goose. Last April there was one. 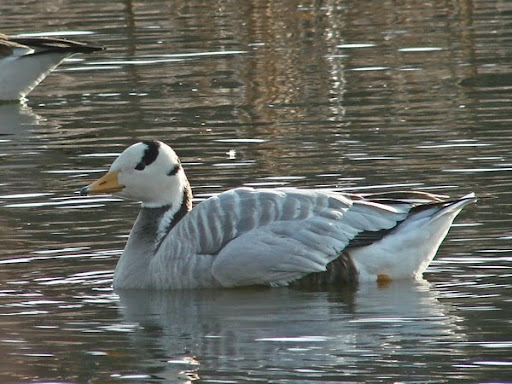 In mid-April the paired Canada Geese were beginning to nest, while the bachelor and bachelorette geese meandered around the waters and pasture. Among the unpaired geese was a Bar-Headed Goose. Smaller than the Canada Geese, the predominantly light gray Bar-headed Goose stood out among the flock. About two-thirds the size of the familiar geese, it was also stouter. The back of its neck was dark brown, the beak yellow, and the head white. The head was also marked with prominent black bars, hence its name.

Geese do not often get called beautiful. That is not fair, but by our species-centric aesthetic standards, geese just don’t measure up. Not so the Bar-headed Goose. It was a beautiful bird.

Most of the local birding community came around for a look, and some birders passing near Brattleboro stopped for a gander. But generally the response was rather muted, and that requires an explanation.

The Bar-headed Goose is native to Central Asia. It breeds on the high plateau north of the Himalayan peaks, then migrates over those peaks to winter in the Indian subcontinent. And that is the problem. How did the Bar-headed Goose get so far off course?

The answer is that it probably did not get off course. This goose adapts very well to captivity and, I am told, is a favored addition to waterfowl collections, especially in Europe and England. Our Bar-headed Goose had no leg band, but collectors often neglect to band their captive birds.

One inventive birder offered the following itinerary for the Bar-headed Goose in Brattleboro. It was a feral bird in England that hooked up with White-fronted Geese and flew north to Greenland. In Greenland it hooked up with Canada Geese and flew south to Brattleboro, where it was found by local birders in April - when most migrating geese are heading north. I need hardly say that there are more than a few problems with this explanation. 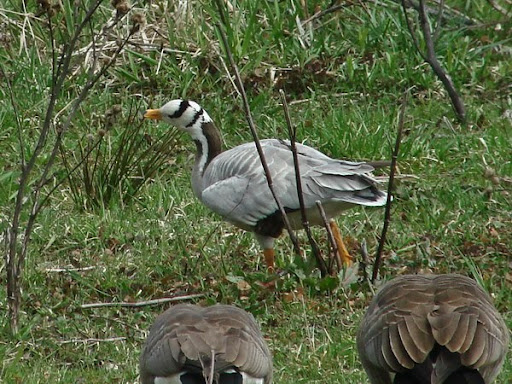 As unusual and distinctive as the Bar-headed Goose is, if it has survived and wanders anywhere in the proximity of North American bird watchers, it will undoubtedly be reported again. 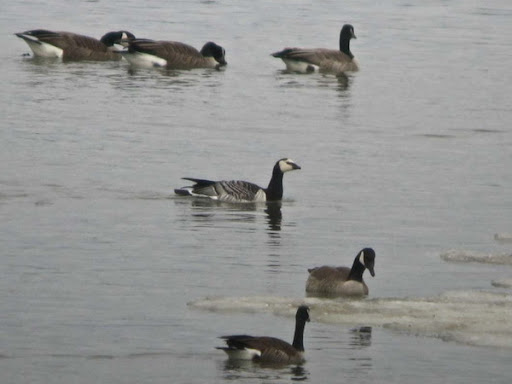 Another rare goose which could show up in the Retreat waters is the Barnacle Goose, a close relative of the Canada Goose. The Barnacle Goose is smaller, pale gray with a black breast, white face and short bill. The white face and white eyebrow make it stand out, even at a distance. In recent years, the Barnacle Goose has been reported during the spring waterfowl migration at the Hinsdale roost just north of the Vernon Dam, and in nearby corn fields. I don’t recall any reports from the Retreat waters, but I would not rule it out.

The Barnacle Goose is European. It winters along the northern coasts of Europe and the United Kingdom, then goes north to breed on rocky coasts of arctic islands. In North America, the Barnacle Goose has been popular in zoos and private collections. The first Barnacle Goose I saw was at the Philadelphia Zoo - and, no, I did not life list it.

Birds escape from zoos and private collections, and for a long time it was assumed that any Barnacle Goose seen in North America was an escapee. There was considerable tension between life-listing birders who wanted another tick, and records committees who dismissed every report of the Barnacle Goose as an escapee, or origin unknown. The life-listers insisted that there were too many regular sightings among the flocks of migrating geese for all of them to be escapees. Their arguments were unpersuasive. The Barnacle Goose is European, insisted various rare bird records committees; it does not come to North America on its own. 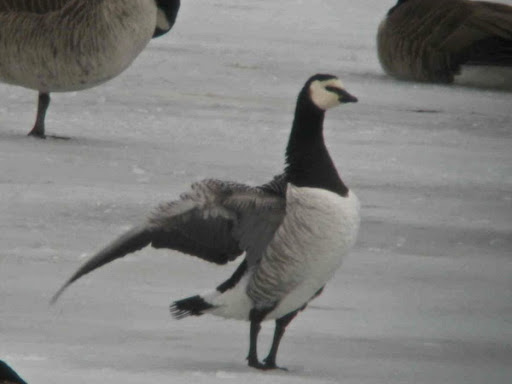 The Bar-headed Goose and the Barnacle Goose are handsome birds that will stand out in a flock of Canada Geese. The Bar-headed seen in our neighborhood last spring was an exotic escapee. The Barnacle, when it appears, is probably a bird whose GPS went awry. Though respectively “impossibly rare” and “very, very rare,” both are avian messages that encourage us to pause and to look at those abundant geese roosting in our waters.

Note: Photos of Barnacle Goose in the Hinsdale roost were taken by Terry Wright who was the first to find the goose in March, 2007, and post the sighting on the VTBIRD listserve. Terry gave me permission to use the photos then, and I hope his permission extends to the present use. Thank you Terry.

Email ThisBlogThis!Share to TwitterShare to FacebookShare to Pinterest
Posted by Chris Petrak at 6:00 AM
Labels: Bar-headed Goose, Barnacle Goose

What an awesome sighting. One could spend a hours looking thru hundreds of Geese for that one different bird. I admire the patience. Great photos.

Chris, these are definitely two very handsome geese. I have seen both on several occassions in the south & east of UK but the comment is often made "they must be escapees". Who really knows..if only the individual geese could talk! FAB

Hi Chris,
This is a very nice post, with a lot of info! Thanks for that... I've seen the bar-headed goose in the middle of Paris, and I guess it was an escapee. The problem is that they now breed in this area. Same thing with a pair of Egyptian goose that I've seen there with chicks!!! The barnacle goose is more common in France and also in Iceland. It arrives by flocks in March-April here during their migration and then fly off one month later. You're right these geese are awesome and your shots and explanation very nice.

Chris, I was one of those who came to look for the bar-headed goose, went to the edge of the West River behind the water treatment plant and saw the goose in a distant flock of Canada geese across the water on a sandbank. As usual I had to have my dog with me who enjoyed himself running along the water's edge, and suddenly the entire flock started moving, swam across the water to come to a halt near our shore to stare down my dog, among them the bar-headed goose who kept somewhat aloof and whose expression by contrast was as sweet and mild as any bird I had ever seen. As you said, a truly beautiful graceful bird, a little bit of a miracle.