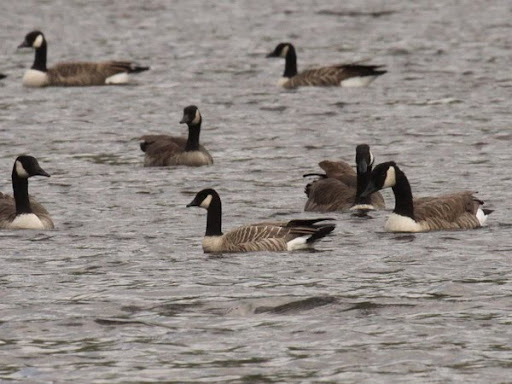 A couple of weeks ago, after getting a clue from some other birders, I searched through hundreds of Canada Geese in the West River and on the Retreat Meadows, and at least one of them was not a Canada Goose. It was a Cackling Goose.

Unless the hundreds of geese are very close, and not feeling skittish, you have to use binoculars (or even better, a scope), and you have to look closely. The Cackling Goose is smaller. The common eastern form of the Canada Goose which nests so prolifically in our waters is about 45 inches in length and weighs about 9.8 pounds. Richardson’s Cackling Goose is about 27 inches and weighs about five pounds. 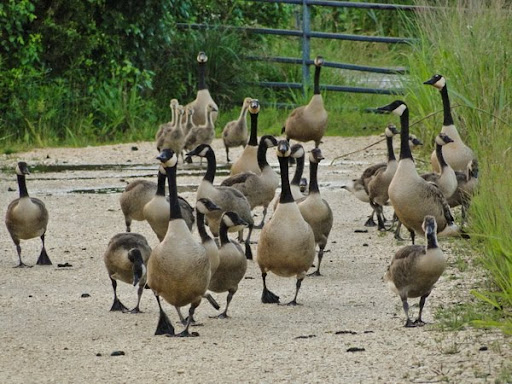 But be careful that you don’t try to make a young Canada Goose, who hasn’t quite grown up, into a Cackling Goose. It is very unlikely that you will see a Cackling Goose during the time when our local geese are raising their young. The Cackling Geese are up in the Arctic doing that for their own species. They are not in our waters during breeding season.

Body size and bill length are probably the best features to look for in picking out the Cackling Goose from the hundreds of Canada Geese. But here, too, caution is in order. Fall, winter, and spring, when Cackling Geese are most likely to be seen, is also the time when the arctic migrant Canada Geese mingle with our non-migrating geese. Among the Canada Geese, there are several recognized sub-species, including the Lesser Canada Goose. The Lesser Canada is generally described as around 36 inches in length, but there is lots of variation, and the Lesser’s size can approach that of the Cackling Goose.

There have been many times when I have searched through flocks of Canada Geese and have tried very diligently to make a smaller Canada Goose (probably a Lesser) into a Cackling Goose. The temptation gets compounded when the head is turned toward me; then the angle makes the bill of the Lesser Canada look much shorter, almost stubby. So I watch carefully until I get a profile, and until the subject in question swims close to an unquestionable Canada and allows for a size comparison. And invariably, my hoped for Cackling remains a Canada. 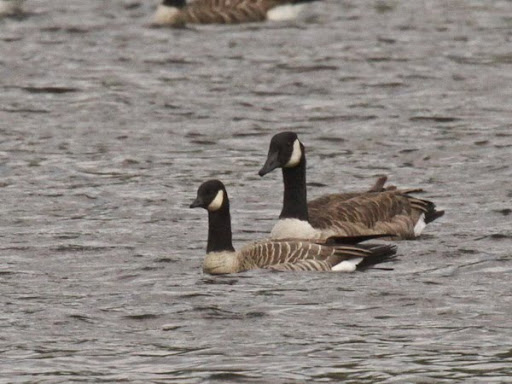 But not in late September when one goose was clearly smaller than the others. Its bill seen in profile was clearly stubby, and that gave it an unmistakably sweet appearance. Then I had a Cackling Goose, first in the West River, and a couple of hours later in the Retreat Meadows not far from the Route 30 boat access.

When birding, there is a temptation to “see” what we hope to see, hence there are a lot of wished-for identifications. I succumb to the temptation often. But when the “I-hope-to-see-this-bird is finally seen, there is a different kind of certainty. Such was the case with the Cackling Goose. Size, bill shape, and subtle coloring differences all combined to make the identification possible.

One other “field mark” which I did not benefit from is voice. The typical Canada Goose has a very distinctive, low-toned “honk.” The Cackling Goose gives a honk that is something like a high-pitched “squeak.”

Field characteristics have suggested to biologists for a long time that the Cackling Goose should be considered a species in its own right, and not a sub-species of the Canada Goose. With the added evidence from DNA studies, about five years ago the mavens of avian taxonomy granted species status to the Cackling Goose (Branta hutchinsii), and have included in this species Richardson’s (hutchinsii), Aleutian (leucopareia) and other smaller forms once considered to be Canada Geese. They all look like scaled down Canada Geese with small bills.

Parenthetically, a rule among taxonomists is that when a species is split into two or more species, each species is given a new name in order to avoid confusion with the old one. For example, the Rufous-sided Towhee was split into the Eastern Towhee and the Spotted Towhee.

But consistency is not a human characteristic and rules are made to be broken. The Canada Goose was split into the Canada Goose and the Cackling Goose.

Take your binoculars and look carefully at the Canada Geese. There may be one out there that has a stubby bill and whose honk is “squeaky,” instead of a “honky.”

Even if you don’t find a Cackling Goose among the hundreds of Canada Geese, don’t fret it. Just taking the time to take a good look at what’s out there is worth the effort. Such a pause in an otherwise busy day can turn an ordinary day into a good day. And you never know what else might suddenly appear. Good birding does not mean seeing what you expect to see, or hope to see. The allure of bird watching is that often you see what don’t expect. 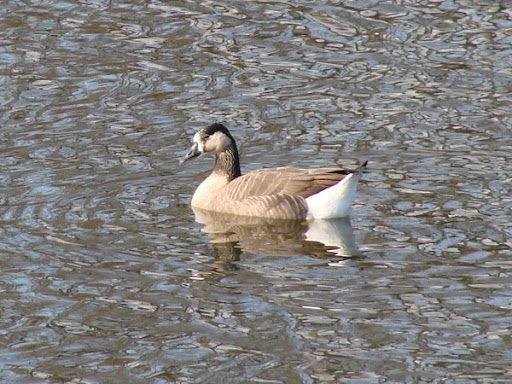 As for example, when I found this hybrid Greater White-fronted x Canada Goose last November in at Millbrook, Audubon's home near Valley Forge, Pennsylvania.

Great post on the Geese. When I see Geese there are usually so many of them it would be hard to go thru each and every one of them to look for the Cackling Goose.
But, thanks to you i know what to look for.

Chris, I can't even imagine being able to spot a Cackling Goose in the midst of hundreds of geese. What a treat it must be to find one though!

Great post, great photos--it will help as I keep an eye out for the CG!

Great post and info on Cackling geese and canada geese..I am going to tweet this out to twitterville..thanks!

Great info. As usual, this would have been good to read before I convinced myself that I saw something different among the Canada Geese I was watching. Now I might have to go back and look again (although I think they were probably all boring old Canandas)