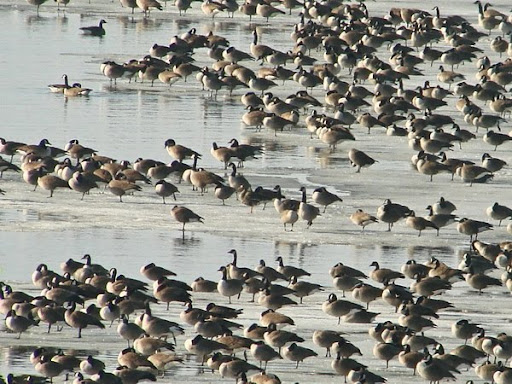 Hundreds, and sometimes thousands, of Canada Geese may seen during the cold season in the Brattleboro Retreat waters and along the length of the Connecticut River. Wherever there is open water and fallow farm fields, they may congregate in huge numbers. Canada Geese are an adaptable, and therefore, very successful species.

Occasionally there may be other geese mixed among the abundant Canada Geese, or lingering nearby. In recent weeks I have written about the Cackling Goose, a diminutive look-alike that is easily overlooked ... and the Barnacle Goose, that winters in northern European, but occasionally strays into North America from eastern Greenland.

Another goose that shows up among the abundant Canada Geese is the Greater White-fronted Goose. In many parts of North America, there is nothing unusual about the presence of this goose. Greater White-fronted Geese are common during the winter in California and along the Gulf Coast of Texas. These birds breed in Alaska and the western portions of the Canadian tundra and taiga. They follow the Pacific coast or Mississippi flyway to and from their wintering grounds. 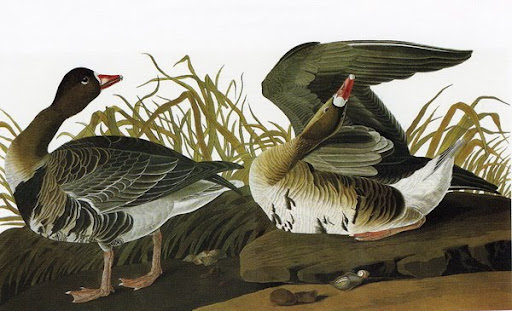 Along the Atlantic coast, the Greater White-fronted Goose is rare, and its presence is always noted by birders looking for an oddity among the Canada Geese. All reports that I know of, at least recently, distinguish these sightings as the Greenland subspecies.

Parenthetically, as the field skills of the A Class birders has grown, they continue to refine and improve. Not content just to identify species, they routinely name sub-species and often discuss, argue and dispute about sub-species differences, characteristics, and intergrades.

I saw my first Greater white-fronted Goose in an old corn field in Concord, Massachusetts. That same winter, I did not go to Arlington, Vermont, for the one that was reported there. Wintering Greater White-fronts are seen rarely, but regularly, in Barton’s Cove in Turner’s Fall, and along the Connecticut River. Last year a Greater White-fronted Goose was found in late March resting on the ice at the waterfowl roost just north of the Vernon Dam in Hinsdale. It was among the two thousand roosting Canada Geese. I am unaware of one being reported in the Retreat waters, but pay attention.

The Greater White-fronted Goose is much smaller than a Canada Goose. It is slender and has a slaty appearance. Bright orange legs are notable, as is the long orange bill of the Greenland subspecies. (The bill is pinkish on the western birds.) A caution: “Beware confusion with the superficially similar domestic Graylag Goose.” (Sibley) The Graylag (or barnyard) Goose is larger and bulkier.

The “white-front” refers to the white-rim at the base of the bill on the front of the face. The “greater” separates it from the “lesser,” a similar European species that does not stray to North America (as far as I know).

The last couple of years, there have also been sightings of the Pink-footed Goose. The documented presence of this species is so recent that only one of my field guides (National Geographic) even includes it. I am going to forego further comment on this goose. 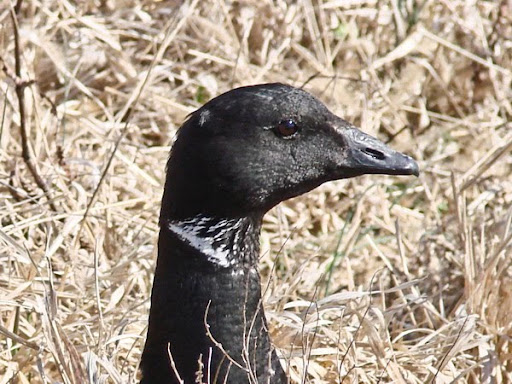 The last of the dark geese that could show up in our waters is the Brant. Seventy-five years ago, Forbush was concerned for the Brant. “Formerly its great flocks were seen both fall and spring in every land-locked bay and harbor where eel-grass grew upon tide-washed flats, but as settlement increased and civilization extended all along the coast, the Brant, unprotected, constantly persecuted in migration and decreasing in numbers, withdrew, until at last it frequented only a few isolated points and islands ....” The Brant has recovered, and now winters in flocks along the mid-Atlantic coast, often in numbers that can be considered abundant. 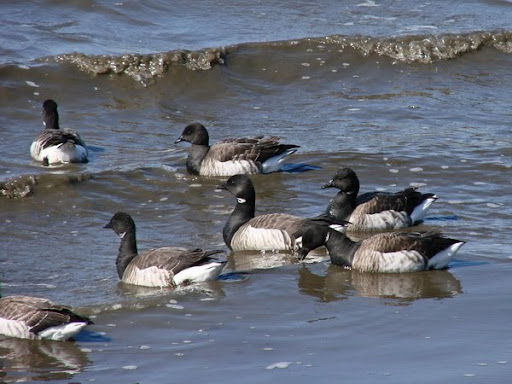 The Brant is primarily a coastal bird. Audubon considered it “a salt-water bird, for it never ascends our rivers beyond the influence of the tides, nor is found on inland lakes or ponds ....” Audubon was right about the Brant being a salt-water bird, but wrong about its presence inland. It does occasionally pause on fresh water, including the Retreat Meadows. Some flocks migrate along the Lake Champlain and Hudson River Valleys. Along their flight south, they may make a right turn, and come through southeastern Vermont. Last year on Putney Mountain, the hawk watchers saw a flock of fifty Brant pass over the ridge. If the geese need a resting place along the way, they may drop down to the waters of the Retreat Meadows.

The Brant is a small, handsome goose that bears a superficial resemblance to the Canada Goose. It is darker than the Canada and has a completely black head (no white cheek patch). On its black neck it wears a white necklace. Sometimes the necklace is so dainty that it looks like a string of pearls. 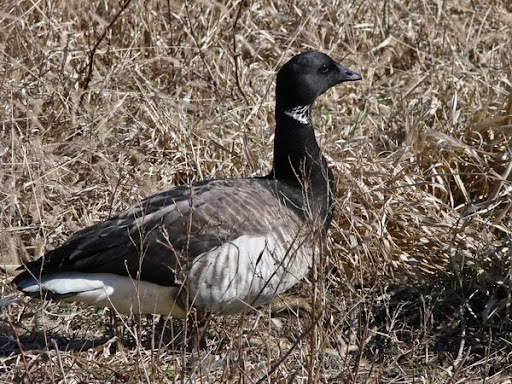 Forbush knew the Brant as “among the wariest of wild-fowl,” and Audubon called it “a shy bird, not easily approached.” The wariness was likely a response to its popularity as a game bird and the toll that hunting took on its numbers. Again, Audubon: “The flesh of this bird I consider as excellent food. The young in autumn, or about the time of their first appearance on our eastern coast, Massachusetts for example, are tender, juicy, and fat; and are well known to the epicures of Boston ....”

With the end of market hunting and protection as a migratory species, the Brant population has rebounded, and apparently has been able safely to alter its behavior. Now it is known as a tame species that “often allows very close approach and usually chooses to swim (or walk) if pressed.” (Dunn)

The abundant flocks of Canada Geese can yield a variety of rare and unusual geese. Bird watchers who slide quickly over those flocks can miss good sightings, and imperil the addition of new check marks on their life lists. Normal people who pick through those flocks may have an “Oh, wow, that’s different!” experience that ratchets up their enjoyment of those commonplace geese.

Note: The first photo is the Hinsdale waterfowl roost, March, 2009. There is a single Greater White-fronted Goose in the center of the photo - look for a white stripe along the side. Now stand on a snow-covered bluff, exposed to the wind, on an early Spring afternoon, and use your scope to search through the hundreds of geese looking for one that is different. Even when one of the ten birders found the goose, it took time to follow his directions to the roosting White-fronted.

Email ThisBlogThis!Share to TwitterShare to FacebookShare to Pinterest
Posted by Chris Petrak at 6:00 AM
Labels: Brant, Greater White-fronted Goose

Hi Chris,
A very nice post you did with excellent shots of the brent goose... It is my turn to tease you this time.... Canada goose is a rare bird over here, and although we see one or two over the year, we rarely see more than that...
But the others, namely the white-fronted goose, the barnacle goose, the pink-footed goose and the brent goose are quite common during the migration time, and you can see them in huge numbers in March-April...We still do have some brent goose at the moment and I know a small group is wintering around the beach close by our house.
Funny to see that birds are not rare for all of us, isn't it ;-)

You are right to "bird every bird!"

I'd still love to see a Brant. Nicely done.