Baffled for a Description

I saw a bird recently that has baffled me for a description. More correctly, it was a species of bird in a nesting colony. I saw a nesting colony with an estimated 62,000 breeding pairs, and I cannot figure out how to adequately describe the experience. 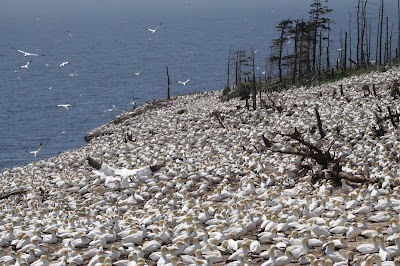 The Island of Bonaventure lies in the Gulf of St. Lawrence just a short distance from Perce on the easternmost tip of the Gaspe Peninsula in Quebec. It is home to the largest nesting colony of Northern Gannets in the world. It is also the most accessible colony in the world. From my home, it is a two day drive, a short boat ride, and a 45 minute walk. Near the end of the pleasant walk, one hears the din followed closely by an intense fish smell and uric acid from excrement. Emerging from the shade of the spruce forest, there is a short expanse of grass, and then a broad plain leading to the precipitous cliff on the island’s eastern side. The broad plain was entirely covered in white, and stretched in both directions as far as could be seen on the rugged island edge. 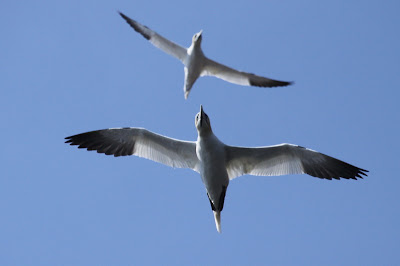 In 1833, John James Audubon sailed in a small barque to see the Great Gannet Rock in Labrador. It was an arduous journey; his son and a few hardy seamen tried to land and examine the colony. They were unsuccessful. “Let me now, reader, assure you that unless you had seen the sight witnessed by my party and myself that day, you could not form a correct idea of the impression it has to this moment left on my mind.”

On the pleasant sunny day when we visited Bonaventure, the boat first toured around the island in a gentle sea. Seabirds swirled in the air overhead, fished in the waters, and crowded onto every ledge and into every crevice on the high cliffs. The broad ledges and gentle slope at cliff top drew the eye. They were covered in white, as though winter snow were refusing to give way to summer. Disbelief withdrew with reluctance. This was not a snow-capped island. It was a gannet capped island.

I need a break from trying to describe the experience of so much bird life crowded together.  Information is my refuge. The Northern Gannet measures 38 inches in length, has a six foot wingspan, and weighs about seven pounds. It is the largest seabird in the North Atlantic. On the wing, the gannet is majestic. It swirls over the ocean’s surface looking for schools of fish. Then its character alters from majestic to dramatic. From heights up to a hundred feet, it plunge dives into the water. Its body and wings become a sleek projectile as its spear-like beak pierces the surface. 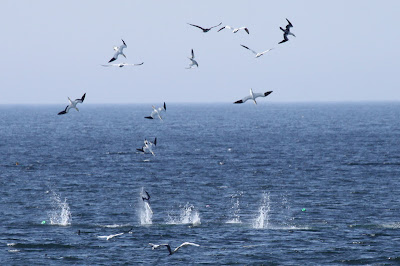 During our three days in Perce, we watched gannets as they fished the waters between the island and the shore. As the tide came in, the gannet clouds came closer to us, always moving as the schools of fish moved. At times so many gannets were fishing the waters that it looked like the sky was raining birds. Plume after plume of white spray spumed from their dives.

When Audubon approached the Labrador colony, “I imagined that the atmosphere around was filled with flakes, but on my turning to the pilot, who smiled at my simplicity, I was assured that nothing was in sight but the Gannets and their island home.”

The Northern Gannet is a seabird; it spends most of its life on oceanic waters. Sometimes it fishes close to shore; more often it is over the waters of the continental shelf far off shore. The plunge dive takes it into the midst of the fish it is seeking. Some remarkable film footage shows that after its dive, the gannet swims in pursuit of its prey. Audubon reports that he saw the bird “remain under the surface of the water for at least one minute at a time. On one occasion of this kind, I shot one just as it emerged, and which held a fish firmly in its bill, and had two others half-way down its throat.”

The Northern Gannet is adapted to life on the oceans. It comes to land only to breed. Then it abandons its power and majesty. Unfortunately for this bird, its scientific names comes from this awkward time when it has to be on land. The gannet is the sole member of the genus, “Morus,” from the Greek for “stupid.” 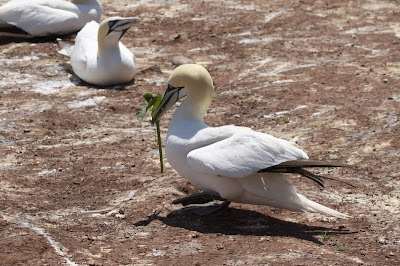 The tag, “stupid,” is not fair to the gannet. But truth be told, on land the gannet looks like a doofus, a creature that is completely out of its element. Most of the gannets in the Bonaventure colony were crowded on their nests. A few were wandering around the edges. A gannet walking on land is not a comfortable sight. He looks a middle aged picnic goer who has gone to the beer keg a few times too often. He is under strict orders not to make a fool of himself, so he shuffles along cautiously, careful to walk a straight line. But it is all a ruse; he looks like he could fall over sideways at any moment.

The gannet has trouble walking on land, but this difficulty is nothing compared to the challenge it faces in landing on land, and taking off again. We watch our small songbirds alight on a twig with grace and precision; we take for granted the chickadee’s deft wing adjustments as it comes to a perch. By contrast, the gannet coming in for a landing is an adventure. The gannet does not alight; it crash lands. Wings and tail provide little braking power. The webbed feet hit first; then the rest of the bird impacts the ground as it plows into its mate and often its neighbors, to their complete annoyance. 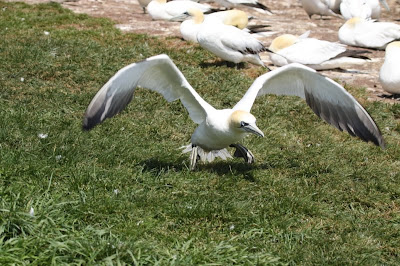 For the gannets that are near the edge of the cliff, getting airborne is easy. They step off the edge. Away from the edge, it is more challenging. Between the nesting gannets and the rail fence there was a fifteen foot wide strip of grass. On the slightly uphill end of the grass, there were four gannets lined up, stretching their wings. Casually my favorite companion said, “They look like planes lined up for takeoff.” Precisely. The lead bird began running and flapping its wings and eventually got airborne, and after a few more wings beats finally looked like it knew what it was doing. A second bird came down the gannet runway with concentrated determination, and then the third and the fourth, each one eliciting from this observer the suspenseful query, “Will he actually get off the ground?” Ah me of little faith; each time the gannet answered in the affirmative.

When the runway had cleared, for the moment, I looked at the colony stretched across the island’s edge. Northern Gannets in the tens of thousands. How does one describe that? The sight of so many birds ... the noise ... the smell. Or must the sensuous impact simply be experienced?

Email ThisBlogThis!Share to TwitterShare to FacebookShare to Pinterest
Posted by Chris Petrak at 6:00 AM
Labels: Northern Gannet

Wow, what ever you felt after this, I truly envy you... This is a magnificent bird and to see a so big colony is probably really fantastic and impressive. I love your picture where we see them fishing!! But 62,000, man this is probably really noisy ;-)

Very interesing post - looks like quite the experience. (just got this as a lifer 2 weeks ago too)