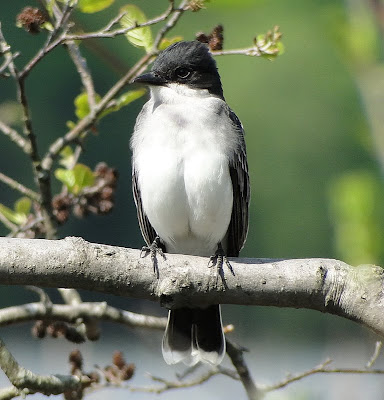 Bird watchers in North America know the Eastern Kingbird as a solitary bird which aggressively defends its breeding territory from all intruders. It is a well-deserved, and well-documented reputation, as I shall shortly describe. But, aggressiveness is not whole of the kingbird’s personality, and it needs to be put into context. During their migration in the Spring, I have seen flocks of Eastern Kingbirds amicably coexisting with one another and all other neighbors. They were not attacking and driving off other birds.

I remember one year watching peaceful flocks of kingbirds during mid-May. My attention was drawn to the horizon where crows were “mobbing” a Red-tailed Hawk. Four large black birds swooped and dove continuously at the hawk as it tried to rise on the weak morning thermal. The red-tail exhibited no aggressive behavior, not even in response to the continuous attacks. It banked and flapped in an effort to avoid the angry crows - I could hear their loud screams even across the distance. Eventually the Red-tailed Hawk flew off, hurriedly escorted by the crows.

One of our largest songbirds, crows manage to live in wilderness habitats as diverse as those of inner cities and remote forests. Often persecuted and preyed upon, they use their intelligence and, when necessary, their aggression to survive. Make an extended trip along an interstate and you are likely to see Red-tailed Hawks perched patiently in trees as they look for their invisible prey in the grassy mediums. You are also likely to see crows harassing a Red-tailed Hawk, preemptively protecting themselves from the predators.

Crows often get what they give. Grackles and Red-winged Blackbirds are aggressive toward crows. I find entertainment and amusement in watching the big guys being attacked and driven off by the smaller guys. For the smaller birds, however, there is no amusement involved, nor is this a casual aggressiveness. They are defending their territory and their nest from a predator. Crows are opportunistic scavengers, and they will take just about anything for food, including a young bird in its nest. When grackles or blackbirds are driving off a crow, it is serious business.

Many birds practice some sort of “mobbing,” the term used to describe this aggressiveness toward a potential enemy. Black-capped Chickadees have a scolding call which will often attract other species, sometimes to help in attacking the predator, or sometimes just out of curiosity. (Not all birds protect their nest and young by attacking a potential predator. The Killdeer, for example, does a broken wing act to lure danger away from its nest.)

Still, there is great entertainment value for the bird watcher in these defensive tactics. I watched a Turkey Vulture drifting low over sand dunes and salt marshes, looking for a thermal to give it some lift. The Turkey Vulture is a scavenger, feeding on carrion and garbage. It may be ugly, but it is basically harmless. That did not matter to the Red-winged Blackbird who dove at the vulture, jabbing at the large bird’s back and rump with its bill, forcing it to flap its wings and speed its departure from above the marsh grasses. 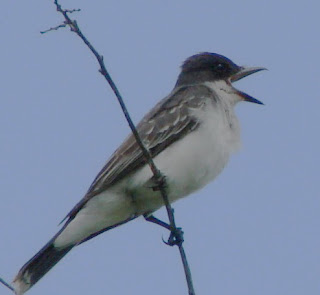 But for sheer aggressiveness and fearlessness, nothing quite compares with the Eastern Kingbird. It is sometimes suggested that the name “kingbird” refers to the little crown of reddish gold feathers on the top of the head, a crown that is usually invisible, like the ruby crown of the kinglet. It is more likely that “kingbird” is a folk name. Many of the European settlers who came to the English colonies were fleeing tyranny. They observed the behavior of this bird and dubbed it “King Bird,” in dubious honor of its despotic character.

The Eastern Kingbird is smaller and slimmer than a robin, dark gray on its back, white underneath, with a white tip on its tail. It is a handsome bird, perching on a wire, tree limb, or the top of low bushes, then flying off quickly, to feed on insects, grubs, flies, mosquitoes, caterpillars, bees, wasps, or whatever else is available. From the same perch, it will also attack any other creature, with or without wings, which dares to intrude on its territory. The small dark bird which you may see attacking a hawk, crow, owl, vulture, or eagle (the list is not exhausted), is likely to be the kingbird.

The Eastern Kingbird belongs to the family of Tyrant Flycatchers (Tyrannidae), birds which share the traits of activity and aggressiveness as they fly from conspicuous perches to capture insects in midair or drive off threats. Locally the Eastern Kingbird is the only representative of his genus “Tyrannus.” His full scientific name (family, genus, species) is “Tyrannidae, Tyrannus, tyrannus,” which I translate (very loosely) as “tyrant, tyrant, tyrant.” 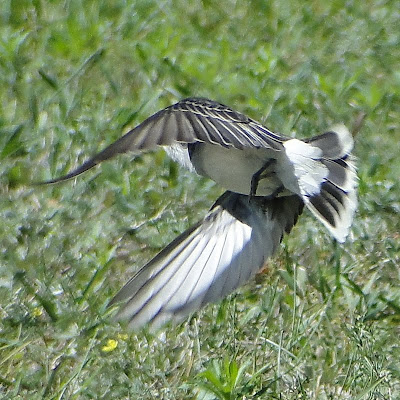 John James Audubon’s description of the Eastern Kingbird’s tyrannical nature merits quotation: “No sooner has incubation commenced, than the male, full of ardour, evinces the most daring courage, and gallantly drives off every intruder .... Should he espy a Crow, a Vulture, a Martin, or an Eagle, in the neighbourhood or at a distance, he spreads his wings to the air, and pressing towards the dangerous foe, approaches him, and commences his attack with fury. He mounts above the enemy, sounds the charge, and repeatedly plunging upon the very back of his more powerful antagonist, essays to secure a hold. In this manner, harassing his less active foe with continued blows of his bill, he follows him probably for a mile, when, satisfied that he has done his duty, he gives his wings their usual quivering motions, and returns exulting and elated to his nest, trilling his notes all the while.

“Few Hawks will venture to approach the farm-yard while the King Bird is near. Even the cat in a great measure remains at home; and should she appear, the little warrior, fearless as the boldest Eagle, plunges towards her, with such rapid and violent motions, and so perplexes her with attempts to peck on all sides, that grimalkin, ashamed of herself, returns discomfited to the house.” 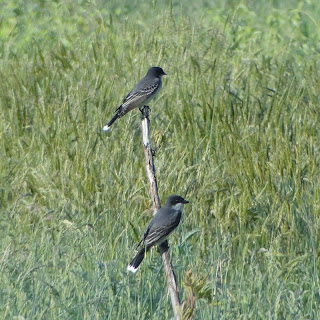 Curiously, this bird which has such a reputation for ferociousness in his North America breeding territory, is a gregarious, noisy fruit-eater during the winter in Central America. There the Eastern Kingbird has the personality of the Cedar Waxwing and is called  “waxwing of the tropics.” Weidensaul (in Living on the Wind) quotes a tropical ornithologist who describes this change from breeding ground to wintering ground as “a behavioral about-face that would do justice to Jekyll and Hyde.” I have seen peaceful kingbird flocks. They were still in migration and had yet to make the transition to “tyrant.”

Listen for the Eastern Kingbird - his song sounds like electricity jumping between two wires. Look for him perched on a wire. And watch for him as he escorts the hapless Red-tailed Hawk from his neighborhood or swoops relentlessly at a passing crow. He rules his territory with ruthless tyranny, allowing no other authority than his own. “Tyranny” is the Eastern Kingbird’s adaptation to the challenge of raising the next generation of his kind.

Email ThisBlogThis!Share to TwitterShare to FacebookShare to Pinterest
Posted by Chris Petrak at 6:00 AM
Labels: Eastern Kingbird

Wow, I'm stunned how patient and how much time you take to write all these things on the bird you see. The pictures are wonderful as well as the text which was a real pleasure to read! Thanks...

One of my favorite birds! Love their tenacity and take no prisoners attitude! Plus they're fun to watch swooping down to catch bugs.

One year we had a pair nesting nearby. My daughter had tied some string around a tree and the poor bird kept flying in circles around the tree trying to take it back to the nest. I finally went out and cut the string, as well as putting many other pieces out. The birds took them all. I delighted in watching them that year. This is the first year in a while that we haven't had a pair nesting nearby. How I miss them!

Great post, Chris. You solved a mystery for me. A year ago in July I took photos of a red-tailed hawk being mobbed by two small birds. I could never figure out what those were but looking at the photos again: they certainly look like kingbirds.