In March, we were in the mountains of Trinidad at the Asa Wright Nature Centre. A recent issue of Birder’s World listed Asa Wright as a favorite international birding destination and one of the ten best places in the world to see hummingbirds. My trip to Trinidad was my first international birding trip, so I cannot assess of either of these assessments. But without a doubt, the week we stayed at the Nature Centre was delightful. 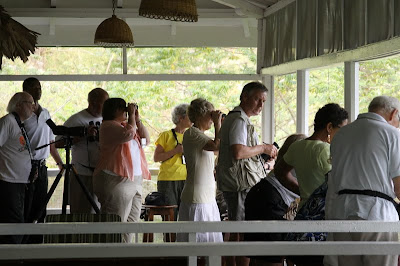 Long before our trip to Trinidad, I decided not to be an international birder, so I felt no compulsion about chasing after birds or compiling a long trip list while on Trinidad. I was content, for the most part, to allow the birds to come to me, and they did. The main building at Asa Wright is the old plantation house, and the most delightful feature of the old plantation house is the veranda. The spacious open porch stretches the width of the house and commands a stunning view of the tropical mountains and forests. The veranda also overlooks the Centre’s many bird feeders - platforms spread with old bread and fruit rinds and multi-perched, red topped nectar feeders. Honeycreepers, bananaquits, and hummingbirds shared and squabbled over the nectar feeders, while tanagers, thrushes, and other tropical and island endemics went to and from the platforms feeders. All were only a few feet from the veranda railing. In the blossoming bushes and flowers, and the fruited trees and vines, birds which were all new to me gleaned the leaves for insects, consumed the fruit, and poked long beaks deep into whatever might provide food. 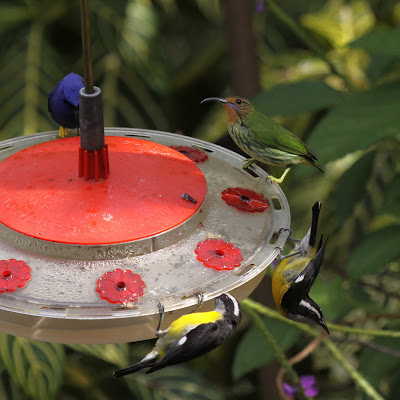 There was always a guide from the Centre on the veranda to help with identifying birds and to search the skies and distant tree tops for species less enamored by human presence - toucans and parrots and hawks.

In the early morning, coffee was available on the veranda. In mid-afternoon, following the best of British tradition, tea was served, and in the early evening before dinner, tropical rum punch provided refreshment. It was a delightful and congenial place to relax after walking the trails, or venturing into the lowlands, a place for refreshment, friendly chat ... and very good birding. With no screens, and feeders hanging from the eaves, often the birding was only an arm’s length away.

So why am I reminiscing about my visit in March to Asa Wright and the Island of Trinidad? Hot,  humid tropical days - that’s why. The weather on Trinidad was just like the days we have had during this early July. Days when I walk a few feet outside to get the mail and come back with my shirt sticking to my back and wiping sweat from my brow. Days when the only civilized activity for the afternoon’s heat is a siesta. Days when the most pleasant activity is to sit on my shaded, north-facing back porch, catching whatever breeze I can, and sipping an unadulterated tonic or seltzer.

And ... on these days, just like those days on the veranda at Asa Wright ... watching the birds. While sitting quietly on my porch during these hot summer afternoons and evenings, I have had a revelation. For four or five months during the year, bird watching in my back yard is as good as bird watching on the veranda at Asa Wright Nature Centre on Trinidad. 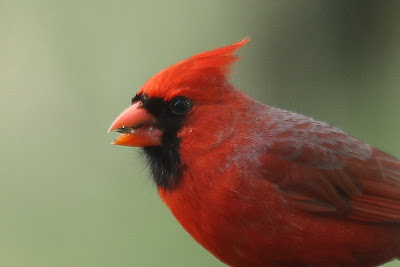 Our brilliant red Northern Cardinal is as least as beautiful as any bird I saw on Trinidad. The same can be said for the black and orange Baltimore Oriole, or the yellow and black and white Evening Grosbeak. The Blue Jay sports handsomely patterned blue and white and black plumage, with the addition of perpetual entertainment as it hurries about its business.

I have been watching the same birds in my backyard for years. They are familiar. I know how the dove flies and spot it as a silhouette against the sky. I know the chatters of the chickadee and titmouse, the rattle of the robin, the sassiness of the jays, and the darting of the wren from bush to shrub. 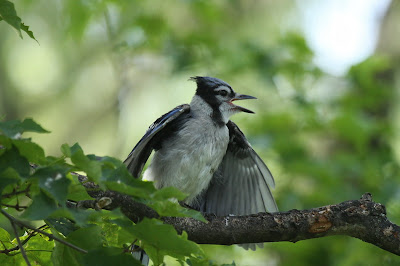 I am sitting on my porch as I write, but I am constantly interrupted. A young Blue Jay lands on a branch above my head. Still not reconciled to having to feed himself, he cries loudly, his wings  fluttering in the hope of attracting a parent with food. I bring my attention back to my writing, but a wine-red Purple Finch comes to the feeder hanging from the eave. A second waits its turn in the lilac. I recover my concentration, then postpone it again as a family of titmice chases back and forth, the young demanding food.

My camera sits next to me. I interrupt my writing yet again to snap off several photos of a fledgling Rose-breasted Grosbeak begging for a parent to come with food. Finally the youngster joins one of the adults on the sunflower feeder and begin to puzzle out the business of feeding itself. 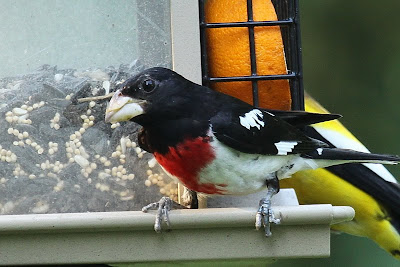 There are a least two pair of Rose-breasted Grosbeaks in our neighborhood. The males are often in the yard at the same time. They are breathtaking. Even on a gray day, the blood red breast glimmers. Throat-cut was the old folk name for this bird. The poetic naturalists described the Rose-breasted as bleeding from a broken heart. When he perches on a branch with the evening sun on him, he is as bright as the brightest red rose. He is equally striking when he flies on his black wings with white spots, giving brief glimpses of red beneath the wings.

The Cedar Waxwing is small, but as resplendent as any bird anywhere. They are feeding in the willow tree. A Red-tailed Hawk soars overhead. Sharp-shinned and Cooper’s Hawks add excitement and drama when they choose the backyard for a hunting ground. Mr. Tom Turkey gobbles up scattered seed. The resident crow family, now six in number, prefers to have me indoors and out-of-sight; they make a wide and noisy circle around the yard whenever I am sitting on the back porch. The Chestnut-sided Warbler is singing again. The robin never stopped singing. Mother merganser led her young down the river, hurrying past me as I took a break from the porch to sit by the river. 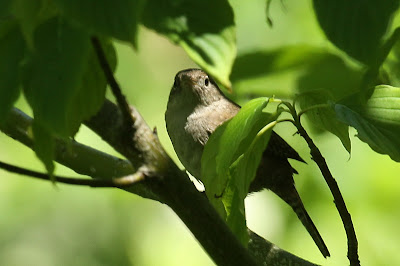 The birds in my backyard are familiar old friends. Some are as breathtakingly beautiful as any birds anywhere in the world. They provide endless entertainment during these hot, humid, tropical days of summer. For several months during the year, my favorite birding destination is my back porch.

The Veery sings his vesper song as the last light of dusk fades away, as though to sing one last time, “Good night, and good birding.”

Awww I love this!

Hi Chris. Just goes to show that you don't have to travel miles to get a daily 'fix' of avian activity. Great post...FAB.