The Call of the Loon 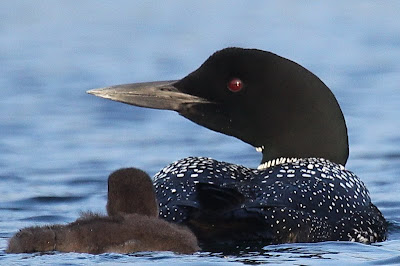 Last summer, Common Loons nested for the first time ever on a small mountain lake not far from my home. The pair which claimed the lake as their own returned this year, nested and hatched a pair of chicks. They are now in the midst of the long process of raising their young: feeding them, teaching them to dive and fish and fend for themselves ... and protecting them from the dangers present even on a peaceful mountain lake.

The loon is an icon of the northern wilderness, a sign of clean water and undisturbed forest. Its song contributes to its iconic symbolism - eerie, haunting, mysterious - suggestive of unseen spirits.

A few years ago, the Common Loon was seriously endangered by development along the shores of lakes, by acid rain and industrial pollution, and even by lead sinkers from outdoor loving sport fishermen. In the mid-1980s, the number of nesting loons in Vermont was only seven pair. The Vermont Loon Recovery Project has significantly improved the status of loons in Vermont by working with citizens, hydro dam operators, lake associations, state agencies, and other conservation groups. Typically, loons do not nest until they are seven years old, so it has taken time for the project to show results. The results are being seen; since 1994, there have been 2-6 new nesting pairs in the state each year. 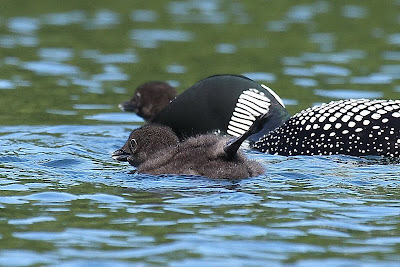 I sat as still as I could in my kayak, watching the loon with the two chicks, ready to move away at any sign that my presence was upsetting or disturbing to the parent. Apparently, the parent was unconcerned, for she (or maybe he) slowly came closer, occasionally dipping her head beneath the surface in search of fish, and finally diving gracefully. When she surfaced, she held a fish in her beak.

Kayaking on a summer evening with loons on the lake induces a serenity and peacefulness. But the loons themselves are not benign actors in a wilderness tableau. They can be highly aggressive toward other birds and violent should one of their own kind intrude on their territory. Last year when they nested on the lake for the first time, they drove Canada Geese off the nest site which the much larger geese had used for many years. The geese returned to nest this year, but on the occasions when I have been to the lake, the geese have kept themselves, and their young, distant from the territorial and aggressive loons.

A few weeks ago, a dead loon was found on the lake. If I have understood the reports correctly, the cause of its death was another loon, probably one of the nesting pair aggressively protecting its territorial rights on the lake.

On my first visit to the lake this summer, I spent most of my time idly watching and photographing the loon with her chicks. A few days later when we decided on an evening kayak, I intended to explore the shore and see what else there was to be seen. But as we put the kayaks into the water, the loons were calling. As though directed by mysterious, unseen spirits, I found myself watching the loon as she kept her chicks protectively close. 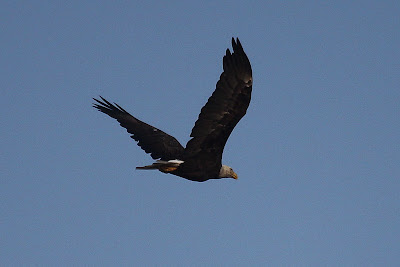 Even though I was some distance away, I was close enough to see that she was wary and agitated. Her eerie call carried over the quiet waters, answered by that of her mate. I moved very slowly, then began to draw away. The calling back and forth increased in frequency and intensity. A word from my more distant companion made me look up. An adult Bald Eagle flew overhead, circled above the center of the lake several times, then landed atop a white pine near the shore.

Gradually the intensity of the loon calls abated, though every few minutes one would call and the other would answer. I was seeing first hand one of those horns of dilemma for naturalists. Here were two endangered, or threatened, species, and one was a threat to the other.

A neighbor has a cabin on a lake in northern Vermont. For years the lake has hosted Common Loons. The loons have acquired a proprietary standing among the people on the lake. They are loved and protected, and regarded as fixture on the lake. And so, there was was great consternation among those lake people a few summers ago when an eagle began hunting the waters of that lake. In what must have been an unguarded moment by the loons, the eagle on that northern lake took one of the chicks. 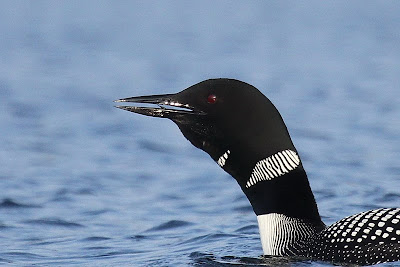 Clearly the loons I was watching on the nearby mountain lake were upset with the presence of the eagle. When it took to the wing again, their alarm calls intensified, and the adult which had been fishing at a distance closed quickly with the other parent and the two chicks.

The eagle landed atop the pine. I left the loons in their protective circle and crossed the lake to where the eagle was perched, slowly drawing close enough to where I could begin to take photographs with my long lens. Eventually my drifting presence on the lake’s surface became too close for the eagle’s comfort, and it flew. Immediately, the loon alarm was raised and they called loudly. 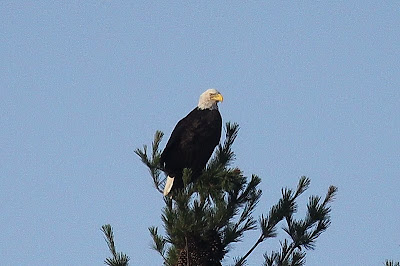 The eagle disappeared into the trees on the opposite side of the lake. I tried to fix the point and began crossing the lake. When I had closed two-thirds of the distance and was in the middle of the lake, the eagle again took to the air, eventually disappearing over the horizon, perhaps headed to the peaceful fishing waters somewhere in the West River or Connecticut River valleys.

But once again, as soon as the eagle flew, the loons sounded their alarm - the eerie call repeated rapidly back and forth before echoing and re-echoing from the surrounding hills.

Soon the alarm calls quieted, and the vesper songs could be heard again ... the flutes of the Hermit Thrush, the back and forth calls of the Barred Owl ... and occasionally still, the call of the loon.

Email ThisBlogThis!Share to TwitterShare to FacebookShare to Pinterest
Posted by Chris Petrak at 6:00 AM
Labels: Bald Eagle, common loon

Great story and pictures!! Thanks...

Chris, fantastic pictures and story! I went out to Sunset Lake yesterday morning, stopped at the boat launch and talked to a kayaker who pointed out a couple of small white moving spots near the far shore. That's about as close as I got! Needless to say I envy you.

I held my breath on this one, wondering what, if anything, I would do, and knowing doing anything would be wrong. I hear your dilemma and your passion, and the pain of standing back to let "nature takes its course."

What an incredible post, Chris. I never knew any of this about loons (being endangered a few years ago, their sometimes aggressive nature, etc.). Beautiful photos too.