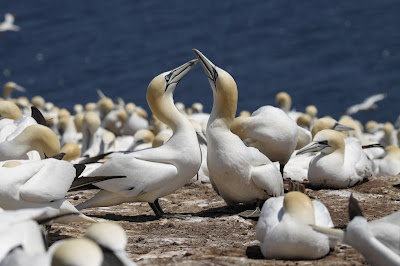 Last month, I tried to describe the Northern Gannet nesting colony on Bonaventure Island in the Gulf of St. Lawrence, off shore from Perce at the eastern tip of the Gaspe Peninsula in Quebec. The colony is the largest in the world. An estimated 62,000 pairs nest on the small island. Plus, there are many younger birds that have not yet paired. When writing the column, I could find no words adequate to the visual and sensual experience - the sight, sound, and smell of so many birds in one place.

Since my visit to the island, I have learned more about the Northern Gannet, the largest seabird in the North Atlantic. The impact on the bird from European contact makes the current nesting colony on Bonaventure even more remarkable. In 1534, the European explorer, Jacques Cartier, gave this account of the nesting islands off the Labrador coast: “These islands were as full of birds as any medow is of grasse, which there do makes their nests.” 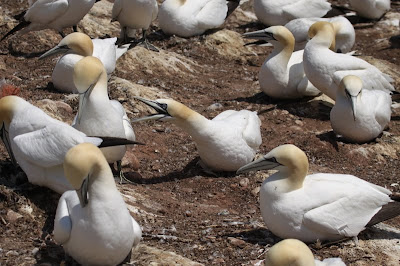 The cold waters of the Gulf of St. Lawrence were premier fishing grounds. Cod fishermen needed bait. Gangly and awkward on land, the gannets were easy prey. Hundreds could be killed in a short time for this purpose. They were also easily chased from their nests, and the single large egg gathered for food.

Even so, three centuries after Cartier’s account, John James Audubon in 1833 was so overwhelmed by the sight of so many birds nesting on the Labrador island known as Bird Rock that he could not even offer an estimated number. A naturalist visiting the island in 1860 found the numbers reduced, but still estimated the colony on the top at 100,000 and along the cliffs at 50,000.

Then the reports begin to tell a different story. Arthur Cleveland Bent in his “Life History” reports that in 1872, three years after the lighthouse was built, the colony on the summit was reduced to 5,000.  “In 1887 the total number of gannets nesting on Bird Rock was estimated at 10,000, and at the time of our visit in 1904 we estimated that their numbers had been reduced to less than 3,000 birds. Fortunately, they are now protected by the lighthouse keeper ...”

Bent continues: “Though not so well known as Bird Rock, the island of Bonaventure ... is fully as important as a breeding resort for gannets, for it contains by far the largest colony of these birds on the American coast.” In 1913 the colony contained about 7,000 gannets.

Since that time, protection to birds in general has been provided through national laws and international treaties. Protection to the critical nesting colonies has come from dedicated stewards, such as lighthouse keepers, and through concerted efforts by government authorities. Bonaventure Island is a Quebec national park, accessible to thousands of visitors each year, while carefully protecting these magnificent seabirds.

When breeding, the Northern Gannet practices a site fidelity, which means that the same pair returns to the same nest year after year. If one of the pair fails to return, the returning bird will find a new mate.

The nest is simple; to our eyes they all look the same, but the birds know which one they used the previous year. Each year they return to the nest, adding fresh eel grass, seaweeds, sticks, and even green grass. As the nest is remodeled with new materials it grows in size. 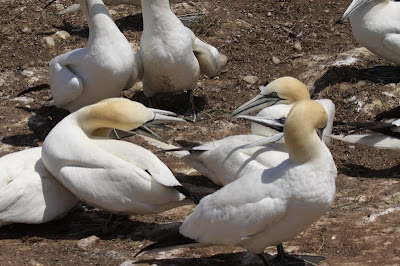 From one viewing angle at the gannet colony on Bonaventure Island, the nests on the top of the cliffs were in clearly distinguishable rows, and evenly spaced. They looked as though they had been laid out with the precision of a Roman town planner insisting on his neat grids, the houses crowded together with fastidious precision. That's about the way gannets do it. Their nest is about 18-24 inches in diameter and less than 3 feet from their neighbor. It makes for crowded urban conditions, aggravated by a decided lack of neighborliness among the birds. With so little distance between one another, each pair jealously protects its space. I saw numerous confrontations as one pair angrily thrust at their neighbors with open beaks, and aggressive complaints. Their neighbors returned insults in kind. 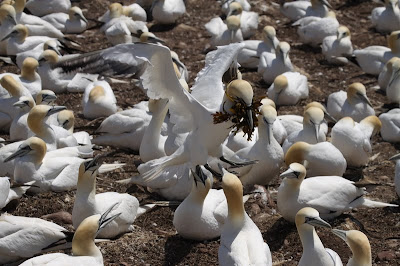 It is no wonder that confrontations are frequent. Within the tiny piece of real estate, a pair conducts their elaborate courtship dance. Though only one egg is laid, they copulate often. When a mate returns to the nest - gracelessly crash landing - they go through an elaborate greeting ritual. It all takes place on a very small piece of real estate. Bent provides a description: “The birds stand face to face, the wings slightly raised and opened, the tail elevated and spread. They bow towards each other, then raise their heads and wave their bills as though they were whetting these powerful instruments, or as if they were performing the polite preliminaries of a fencing bout. From time to time this process is interrupted as they bow to each other and appear to caress each other as each dips its pale-blue bill and cream-colored head first to one side and then to the other of its mate’s snowy breast. With unabated enthusiasm and ardor the various actions of this curious and loving dance are repeated again and again, and often continue for several minutes. After the dance the pair preen themselves and each other.” 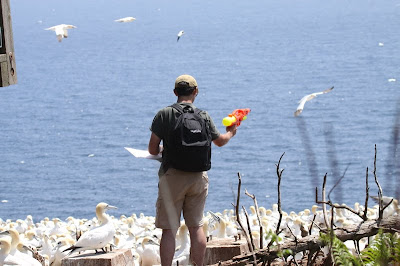 Thousands of people visit the gannet colony on Bonaventure Island each year, but the birds  have no concern with the human voyeurs and go unmolested, except for the occasional researcher.  I watched a young man standing at the edge of the colony making notes on a clipboard. He was collecting some kind of data. What I could not understand was why he was pointing a large, multi-colored water pistol at the colony. When he  passed me on the path, I asked him. With the water pistol, he squirted a bird sitting on a nest. The bird stood. He could see if there was egg and make note. The bird sat again. For all of the sophisticated technology used in research today, sometimes a child’s toy and a clipboard will do the trick.

The gannet colony on Bonaventure Island was impressive and inspirational, a conservation and recovery success story. But, when they finish nesting, many of these gannets will migrate to the Gulf of Mexico for the winter months. Many young gannets will spend their first two or three years in those waters. For years to come, researchers will be studying the impact of the environmental disaster in the Gulf of Mexico on an island in the cold waters of the Gulf of St. Lawrence.

Email ThisBlogThis!Share to TwitterShare to FacebookShare to Pinterest
Posted by Chris Petrak at 6:00 AM
Labels: Bonaventure Island, Northern Gannet