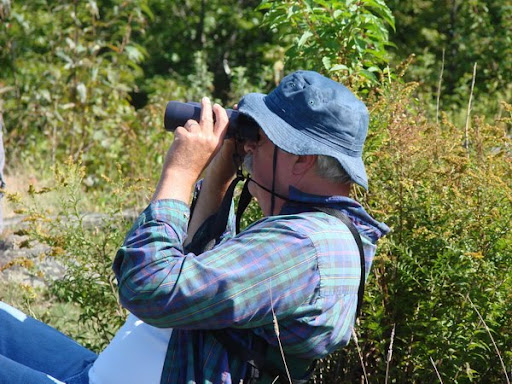 The Putney Mountain Hawk Watch got underway this week. During September and October there will be at least one volunteer counter on the Putney ridge every day except when it is raining. If you can make it up, you will certainly be welcome. If the watchers are not busy watching hawks, they will be happy to talk with you about hawks, which is not always the case at many other hawk watch sites.

Specialty pursuits have their own vocabulary. Banking and finance, for example, have points, collateral, and arbitrage. Law enforcement has APBs, and perps. Preachers are among the most arcane with their hermeneutics, eschatology, and exegesis. Medicine is so full of specialty vocabulary that I can’t even begin.

Hawk watching is no different. Like all specialty pursuits, it has its own vocabulary. So if you visit Putney Mountain this fall, it might be helpful to have a primer on the jargon.

Let’s begin with “bird.” When a hawk watcher is staring intently at the sky and says, “Bird,” that means - “Pay attention everyone, there is a hawk up there, too far off to identify yet, so get on it and let’s see who’s right first.” 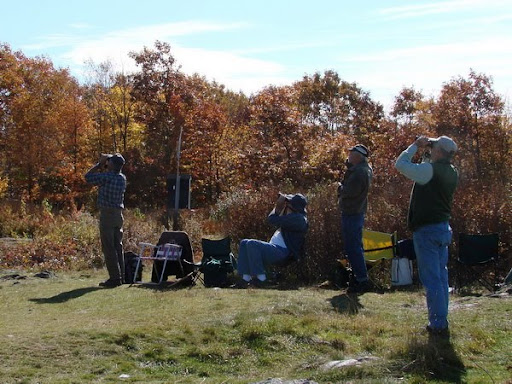 They certainly don’t mean just any bird. Song birds passing through are of interest and may be identified, such as jay, waxwing, woodpecker, or goldfinch. Sometimes those small songbirds will simply be called “food bird” as they fly across the ridge top clearing, a reminder to visitors at the hawk watch site that many passing hawks feed on song birds.

“Bird” will also abruptly interrupt any current conversation you may be having with any hawk watcher in mid-syllable as they turn their attention to reason they sit on the ridge for hours at a time.

An “Eye bird” is a bird which should be visible without the use of binoculars, if you have good eyesight, or an up-to-date eye glass prescription. Even so, you still may have to search for it, especially against a terrible blue sky.

Cops “tail” a suspect. Crude young men hope to get some. At a hawk watch site, “tail” means Red-tailed Hawk, a large buteo. Like all buteos, it has broad wings which allows it to ride the air currents and up-drafts, or hover (“kite”) in one spot while it searches for food. Resident Red-tailed Hawks are often seen during September wandering along the ridge. They are seen as migrants in mid to late October. Often the biggest migration of “tails” is in November, though impending winter weather often keeps all but the most hardy hawk watchers off the mountain. 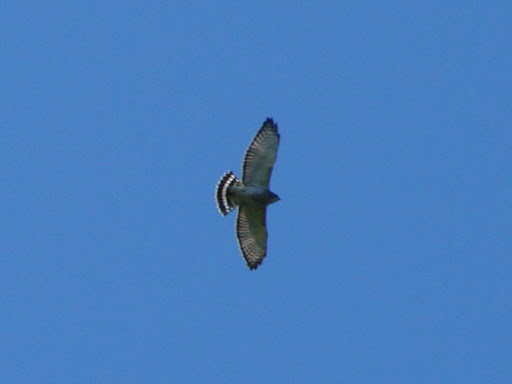 “Broadie” will alert you to the Broad-winged Hawk which migrates in the greatest numbers. On Putney Mountain there are always a few times in mid-September when hundreds of broadies are counted in a day, hence the term is typically spoken as a plural. Note that this verbal shorthand for Broad-winged Hawk is always said with the “ie” attached. Most hawk watchers are male geezers who have long since learned not to risk saying something like, “Look at all the broads.” They are also at the stage in life where a Broad-winged Hawk is more exciting anyway.

The Broad-winged Hawk is the smallest buteo; it is on its way home to the tropics, somewhere in southern Central America and South America. It journeys thousands of miles by forming “kettles,” rising up on “thermals,” then “streaming” off to the next thermal, often traveling many miles with scarcely a wingbeat.

“Themals” are rising warm air which might form over parking lots, fields, a rocky ridge, or anywhere else where conditions warm the air more in one spot than another. This rising air gives a free lift to the broadies. They form “kettles” of half a dozen to several hundred birds, circling upward on the warm air, the way bubbles might rise in a boiling kettle on the stove top. When they reach the top of the thermal where the warm air is beginning to disperse, they look southward to see where the next warm air mass is forming and “stream” off. Or they “stream” off until they encounter the next thermal, get their next uplift, and so continue.

A “shoulder” is a Red-shouldered Hawk, a buteo intermediate in size between the Red-tail and the Broad-winged. Uncommon in the north, it often has to be studied, or picked out, from among many other migrating hawks.

The accipiters are short-winged, long-tailed hawks, features which allow them to maneuver through the forest in pursuit of prey, often birds. They are often called the bird hawks. Hawk watchers announce the accipiters with abbreviations of their names. And so, a “sharpie” is a Sharp-shinned Hawk, the smallest accipiter. A “coops” is a Cooper’s Hawk. And a “gos” is a Northern Goshawk, not to be confused with a “gas hawk,” which is a passing airplane. 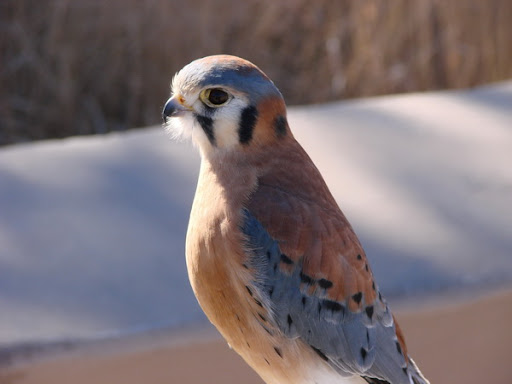 Falcons are fast flying birds with pointed wings. The American Kestrel, our smallest falcon and arguably the most beautiful of the hawks, is simply “kestrel.” The “P bird” is the Peregrine Falcon, back from the brink of extinction, and always a cause for excitement.

Occasionally someone on Putney Mountain will exclaim, “What was that bird?” Then you know that a Merlin just went through. Along the ridges, our third falcon typically flies low and fast along the ridge. It is here and gone with breathless speed. 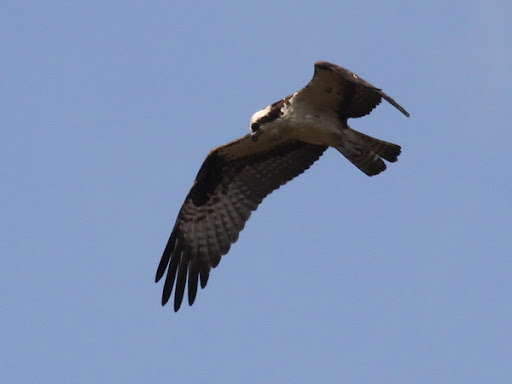 The “O bird” is the Osprey. It flies with its long wings held in the shape of a capital “M,” so it is sometimes referred to as the “Flying M,” less rarely as the “Arches,” (as in the Golden Arches). Some hawk watchers think the wings look like a “W” rather than “M,” but there is a deep-seated aversion to referring to the Osprey as “W” - just too many negative overtones for conservationally-minded hawk watchers. The Osprey is also known as the “Alma bird,” because it is the favorite hawk of Putney Mountain’s hawk watch matriarch.

A “Flying Marshmellow” refers to a Northern Harrier with its prominent white rump patch which is visible at great distance. “Eagle” is always Bald Eagle and creates plenty of excitement, while “Golden” means Golden Eagle and generates euphoric excitement.

Hawk Watchers enjoy watching the “TV,” Turkey Vulture and are anticipating a few more “Blacks,” meaning the Black Vulture, a southern species which is extending its range northward, and in the fall must then migrate southward.

Email ThisBlogThis!Share to TwitterShare to FacebookShare to Pinterest
Posted by Chris Petrak at 6:00 AM
Labels: Putney Mountain Hawk Watch

Great piece. I get a kick out of how the vernacular has evolved since the times when I was a power birder. We had a vernacular back in the 80's and 90's in the west. Now with Twitter and such forms of rapid communication, I'm sure that the jargon will grow and eventually stabilize. What is not observed very often is that there are three levels of jargon. This is true in all professions. First is the beginner which is just leaning the language. This is usually technically correct. The second is the intermediate and advanced level which has its slang, then we get to the specialist level (usually isolated from the first two groups) which has even deeper slang, such as your hawk counters.

Just as an example, I just found this on Good Morning Gloucester run by my buddy and lobster dealer Joey of Captain Joe and Sons Lobster. Check out what he calls lobsters.

Nicely done, Chris. Very enjoyable to read and imagine the hawks flying over the ridge.

Hi Chris,
Excellent and funny at the same time... yes I guess you have to learn the jargon before going out with these guys :-) I think I'm in the first category defined by Steve, for me a bird has a name and dots... Maybe that's my scientific background, I dunno!