The Fall Equinox was this week. The “Farmer’s Almanac” tells me that today’s length is twelve hours and one minute. Starting tomorrow there is more night than day, and it only gets worse for the next three months as we head toward winter.

Long lines of geese cross the distant horizon. We hear their honking from somewhere overhead. Confusing fall warblers are heading to the tropics; the striking and colorful plumage differences that make these birds the envy of the world is now muted. The warblers all “look alike.”

The birds came north a few months ago because our temperate northern forests provide a protein cornucopia for raising young - insects, creepy crawlies, amphibians, reptiles, rodents and other small mammals compress their reproduction into a few intense months, producing so many offspring that birds come from thousands of miles to enjoy the bounty.

That protein bounty is about to go into hiding, or dormancy, and the birds are leaving. 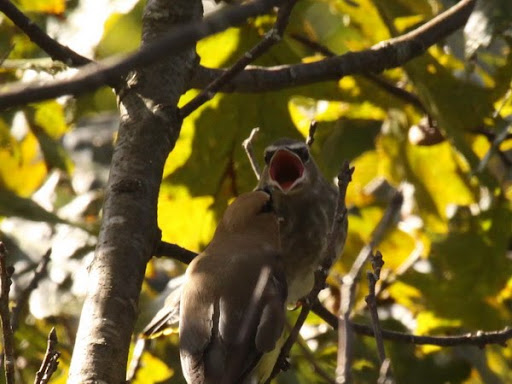 Most species are through with raising young for this year, but a few are still busy with the task. Late nesting American Goldfinches were in my backyard early this week feeding fledglings. On Putney Mountain one early morning last week, I watched a Cedar Waxwing feeding fledglings. For at least an hour, the young birds did not move from their perches in the scrubby oak tree; they waited for their parent to return with food, then fluttered wings and offered a gaping mouth. This was a late brood. Elsewhere around the opening on the ridge, young waxwings were practicing their flycatching skills. Except for the proximity of their parents, they were on their own. 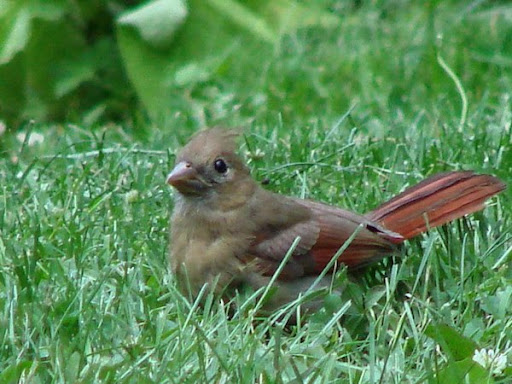 About a week ago I was surprised to see a very young cardinal on the ground around my feeders with his mother. He was a plain, dull tan-colored bird. He had only a trace of red wash in his feathers. His beak was black, not the orange red of the adults. Mother cardinal had led this young bird to a source of food where it could learn to forage. This may have been one of the first times he was expected to feed himself. He tried his begging posture, but without success. She ignored her fledgling’s pleas, and fed herself. She was beginning to replenish her fat reserves which she had expended in the arduous task of laying eggs and feeding young.

This very young cardinal was around the feeders for several days with one or both parents. Gradually he learned to feed himself, a picky picky eater. He still half hoped a parent would do the job for him. But the parents had shifted out of parental mode. Their hovering young might make it or might not. The adult cardinals knew that they would soon face the challenge of personal survival and that trumps all else.

Other young cardinals have been around the feeders for months. The ones that first appeared in late June or early July are molting into adult plumage. The males are beginning to acquire the red feathers that will make them such bright spots in the dull winter landscape. 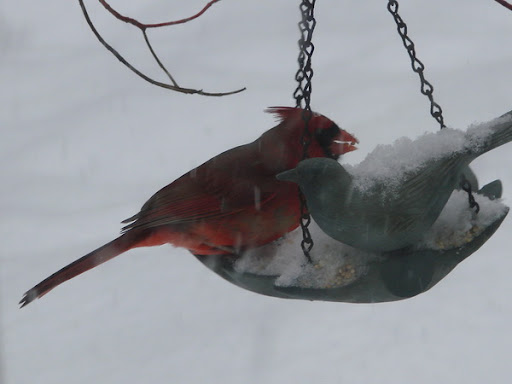 The Northern Cardinal is an abundant bird of our southern states. It has been expanding its range northward. In the 1920s, Forbush knew of a few year-round cardinals “as far north as the region about New York City.” In Vermont, a sighting was recorded at Wells River in 1933. It wasn’t until the 1960 Christmas Bird Count that the next sightings were recorded - three that winter. By the time of the first breeding bird atlas in Vermont (c.1980), the cardinal had expanded its breeding range along the river valleys.

The cardinal is not abundant in Vermont, although it is common. It is non-migratory. A pair tends to stay on or near its territory throughout the year, while younger birds may flock together. The pair bond relaxes during the early months of winter, then renews in late winter and early spring as the male and female sing together and feed together. The female is as accomplished a vocalist as the male, something that is rare in the bird world and which doubles the pleasure of their human audience. 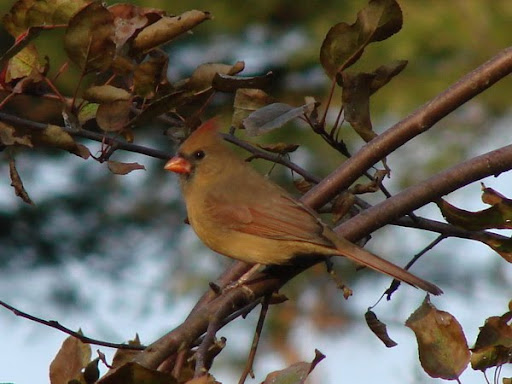 With her warm brown plumage splashed with red, the female cardinal is a beautiful bird. But her mate, sporting his brilliant red feathers and cocky red crest trumps any attention she may attract.

The male cardinal is a fierce defender of his territorial prerogatives. He will drive off any real or imagined rival with persistence, even when the intruding rival is his own image in a window. When we lived in Pennsylvania, for several summers we had a male cardinal who banged against the bedroom windows in an effort to drive off his reflection. This week someone told me about a male cardinal who attacked the side view mirror of their car; he saw another male cardinal in the car’s mirror, and was determined to drive it away.

The male cardinal also has a strong instinct to feed. He feeds his mate when she incubates and tirelessly feeds his own young. Male cardinals have been observed stuffing food down the throats of nestlings of other species. One male even fed goldfish in a backyard pool. I would suspect the sobriety of the reporter, except for the accompanying photograph (in “Song and Garden Birds,” by Wetmore, 1964.)

Cardinals raise two or three broods during a summer; four broods have been recorded. Multiple broods and warming climate are contributing factors to the range expansion of the cardinal. Bird feeders help as well, providing a food supply during the difficult winter months. I have yet to meet anyone who is not delighted to have cardinals at their feeders and often hear disappointment at their absence. 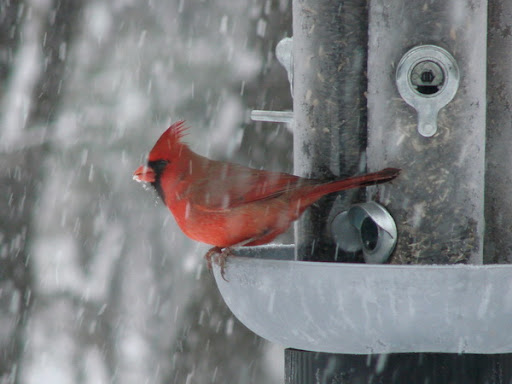 Most songbirds are heading south. The ones who stay around may be noisy with calls and chattering, but their melodious songs are over for the year. Except for the cardinal. This redbird may sing any month of the year, as though practicing for the springtime serenades. If the young cardinal at my feeders learns to feed himself, then he will soon be able to start learning the songs of his parents - his melodious cardinal songs adding to the fall colors and brightening the crisp days of winter.

“In richness of plumage, elegance of motion, and strength of song, this species surpasses all its kindred in the United States.” So wrote John James Audubon, and who am I to argue with Audubon.

I saw the young cardinal again today - still in plain plumage, still with a black beak. He was busy feeding himself on my seed. He’s learning, and that Good Birding!

Email ThisBlogThis!Share to TwitterShare to FacebookShare to Pinterest
Posted by Chris Petrak at 6:00 AM
Labels: Cedar Waxwing, Northern Cardinal

As always enjoyable informative reading this morning before heading off to work. I am always learning something new from your articles.

Such great information you share w/ your beautiful photos! I have a soft spot for the cardinals. I have a pair in my yard that have become very territorial. I've had to close up my car mirrors a couple times due to the male's persistence in fighting its reflection!

I love to read articles about animals they are so cute and intelligent at the same time and it is incredible how many things do we have to learn of them.

I live in mid-town Manhattan, NYC. Early this morning, I heard a very loud bird song through the screen door on my 12th floor balcony. Yes, it was a magnificent cardinal right on my balcony rail.
I was a few feet away and he looked at me and then flew away.
Wed., July 27, 2011
Gene T. New York City

Hi! Thanks so much for taking the time to share your post; this posting has evoked the most response.

Thank you for sharing to us.there are many person searching about that now they will find enough resources by your post.I would like to join your blog anyway so please continue sharing with us