The regulars at the Putney Mountain Hawk Watch have been anticipating this day. One of our group, Woodcarver Phil, has been making guarantees to people about the number of hawks they would see on September 16. Phil looked at the count numbers for the last several years and noticed that the counts were very good on Sept 16 except when the day was rained out. And BTW, one of my regular readers, Frank at The Early Bird, also looked up the records on line and has been wondering if the 16th would hold to the pattern. He commented on the previous post.

There were a lot of people on the mountain to watch hawks today. It felt like October. It was gray, overcast, and raw. By all conventional wisdom, it was not a good day for Broad-winged Hawks to be flying. They need sun to create thermals for lift and gentle winds so they can stream south. But the weather reports called for clearing in the afternoon, so about two dozen people were on the ridge when I arrived about 11:00am.

The regulars were anticipating that disappointed visitors would be angry about an empty guarantee, and maybe do something about it - such as throwing Phil over the side of the ridge - we are very supportive of one another. 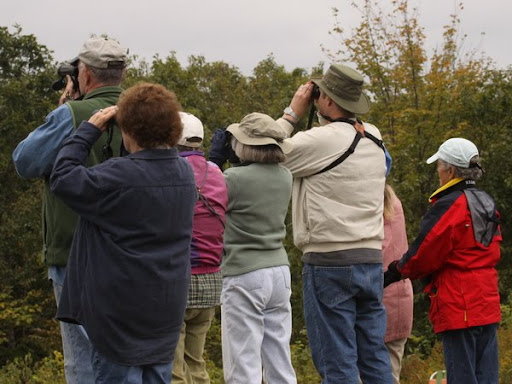 As soon as I arrived on the ridge, I put up my binoculars to see what everyone was looking at. There was a kettle of 20+ broadies. They had just begun flying, and for the next hour, against a dull gray sky, we went from kettle, to kettle, to kettle, or from stream of hawks to stream of hawks, with hardly a moment to catch the breath. Phil had "guaranteed" that people would see 500 broadies on the 16th. Between 11 and 12, 650 hawks were counted.

I took this photo of Phil at around noon time. Before I took the picture, I asked him to give me a smug look - though the question was unnecessary. In spite of all conventional wisdom about making predictions to anybody about what birds will be seen (much less a guarantee), Phil was dead-on right. 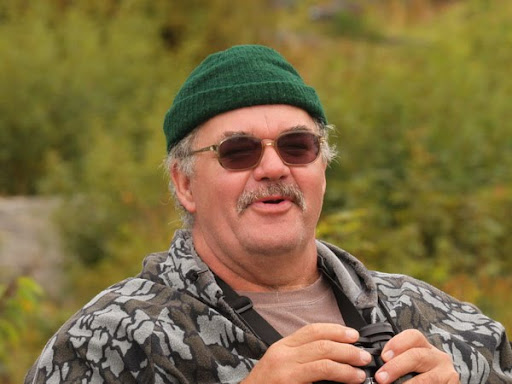 The numbers climbed more slowly after the noon hour, and I haven't gotten the final tally, but I am sure it will push, or exceed, 1000 - on a day that was lousy for flying. For Putney Mountain, that is an excellent day. The counters at this hawk watch "count" the birds, but several times the birds were so numerous that estimates had to be made.

As a group, we are very cautious, and very conservative, when counting, and even more so when estimating.

It was not a good day for photography, with poor light, and birds too high for the camera, but not for the eye. Here is one photograph of a portion of one kettle - there were birds that had already streamed out of this kettle -others that were still rising up - and yet others that were fading into or out of the clouds. I count 27 birds in the photograph. 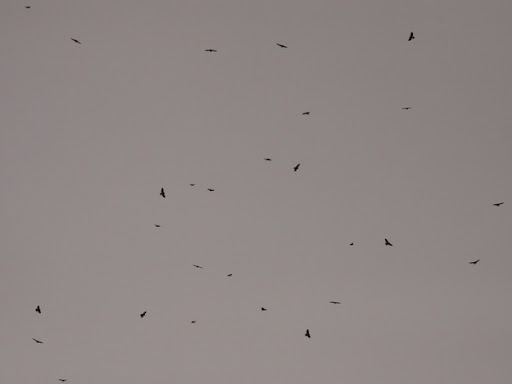 Is it even necessary to say, good birding!

Love your pictures! The one problem with having as many Broad-winged Hawks as you did in the past is that anything lower than that in comparison is just not the same! ;-). You are all getting some fantastic numbers up there in VT and I am sure you are not quite done yet. Good luck tomorrow!

Hi Chris,
I think yes, it is necessary to say good birding, cause the situation over there is quite desperate! Gosh the weather is bad and nothing to be seen around except redwings and starlings. Looks different for you with these hawk tours... I really envy you now, this time of the year is bad for us!