After months with Evening Grosbeaks coming daily - often in a flock of 50+, once 100+, today there have been NONE. What ungrateful birds! There has never been a lack of seed. In fact, most mornings I have filled feeders and cleared snow before sunrise, the task being done second only to the feeding of the cats (who will not tolerate any delay in getting their breakfast). You would think those grosbeaks were a bunch of corporate execs, who get their seed bonuses with nary a thought for the poor smucks who labor to make it possible.

However, early this afternoon I heard strange noises. Suspecting the cats had cornered some tiny intruder to the old farmhouse, I investigated. It was a rare instance in which the cats were innocent. The strange noise was gobbling. A flock of turkeys were transiting the yard on both ends of the house, and along the river. I got my count to 36, probably with half again as many being missed. 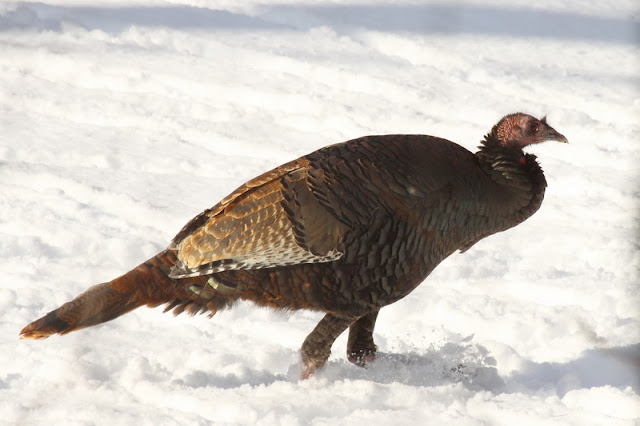 The Wild Turkey is a wary and skittish bird. As soon as I snuck onto the back porch for a photo op, they knew I was there and hurried away. 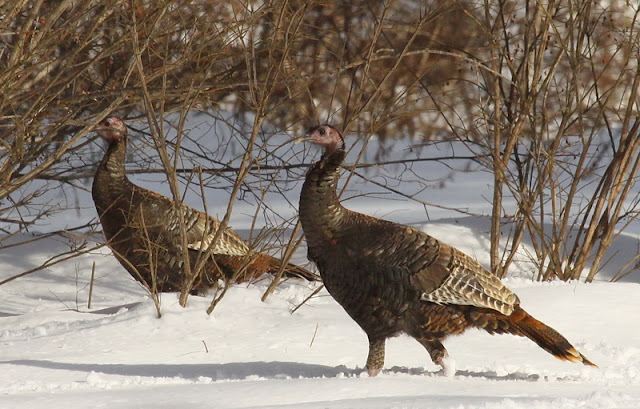 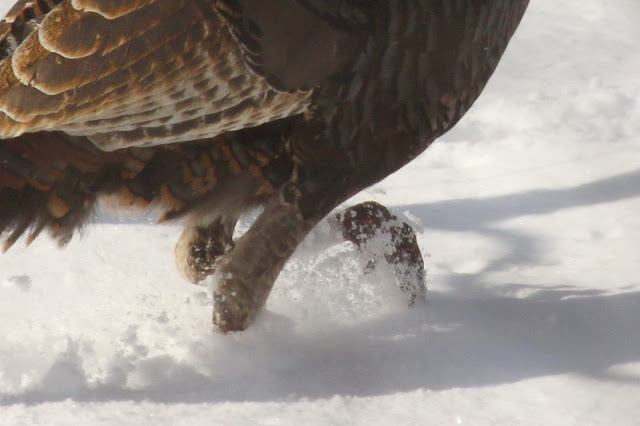 In addition to a maze of turkey tracks, there were other tracks close to the feeders following last night's snow. Our motion activated camera caught a Gray Fox - not much of a picture, but it shows what we miss when we are sleeping. 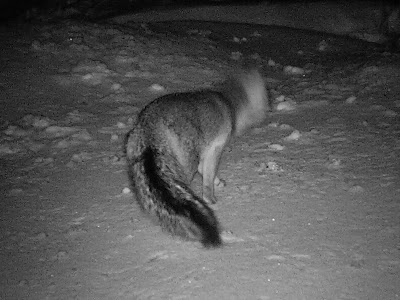 Don't you love to see wild turkeys in your yard? Great shot of the gerey fox with your motion detector camera. Lots of stuff happens when we aren't looking.

What do the grosbeaks know that we don't know. -- barbara

We have Foxes roaming through the garden most nights and even yesterday one strolled passed me in broad daylight while I was clearing up without a care in the world!

So this bunch of turkeys obviously survived the festive season(s)!
It is such great joy to look at your beautiful bird images and read what you have to say about them. I have to try visiting more frequently.

Neat shots of your turkey visitors.

Fantastic pictures!
I only saw live ones in ... South Africa!!
The Ocellated Turkey, actually!
Your shots make me VERY envious!!!
Well done for the fox! Not easy to catch!

Your photos always astonish me--so clear and crisp! Hope you will consider a photography seminar blog post someday!
Stay warm, and blessings on you for helping these animals in such a harsh winter!