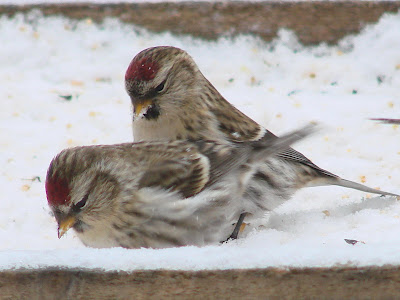 “What a rich contrast! tropical colors, crimson breasts, on cold white snow! Such etherealness, such delicacy in the forms, such ripeness in the colors, in this stern and barren season!”
-- Henry David Thoreau, Concord, Massachusetts, December, 1855


On the morning of the blizzard, I was doing some work in my study while the rest of the family was slowly stirring into activity. My grandson came up the steps and said, “Grandad, you should see all the birds at the bird feeders.”

“Ohhh, you’ve got to show me,” and I followed him down the steps.

In the kitchen, he stepped slowly. “Don’t scare them,” he warned.

The platform feeder was covered with small, brown streaked birds, and my first thought as I looked from mid-kitchen through the window was that the Pine Siskins had returned. As I crept closer to the window with my young guide, the connection between eyes and brain started to wake up. Some of the fifteen small birds crowded on the platform were facing me, and they had reddish wash on the breast, a tiny black chin, and a red crown.

“The redpolls are here!” I announced quietly. 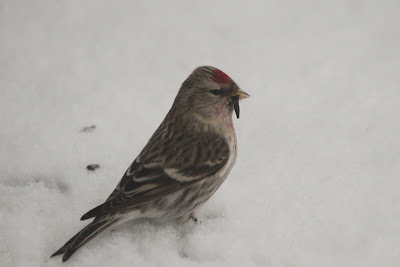 I had been expecting them - or to be a little less arrogant - I was expectantly hopeful that redpolls would visit the feeders this year. I did not see a single redpoll all of last winter, and the last time I had significant numbers was during the winter of 07-08. But this year redpolls had been reported for a couple of weeks, the reports gradually moving from northern Vermont toward southern Vermont. My expectations were high.

The “Winter Finch Forecast” stoked the expectations: “Redpolls should irrupt into southern Canada and the northern United States this winter. The Common Redpoll's breeding range in Ontario is mainly in the Hudson Bay Lowlands from the Manitoba border southeast to southern James Bay. Redpolls in winter are a bird seed specialist and movements are linked in part to the size of the birch crop. The white birch crop is poor across much of northern Canada. Another indicator of an upcoming irruption was a good redpoll breeding season in 2010 with double and possibly triple broods reported in Quebec. Samuel Denault of McGill University has shown that redpoll movements at Tadoussac, Quebec, are more related to reproductive success than to tree seed crops in the boreal forest. Redpolls will be attracted to the good birch seed crops on native white birch and European white birch in southern Ontario and to weedy fields. They should be frequent this winter at feeders offering nyger and black oil sunflower seeds.” (Ron Pittaway) 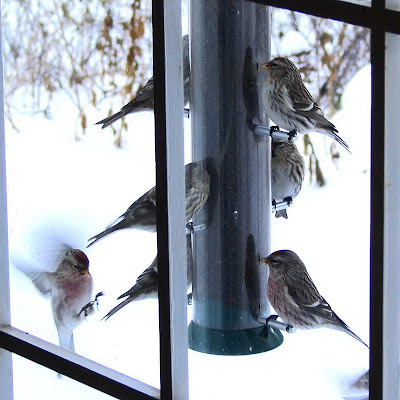 The Common Redpolls crowded the platform outside the kitchen window. They filled the perches on the sunflower feeder hanging from the eave. They scratched the snow beneath the hanging feeder and around the bulk feeder, and they milled on the porch where I had scattered seed. Counting a restless, ever moving flock is difficult, but over the next couple of hours I became confident that the redpoll flock was a conservative fifty-plus.

The redpolls shared the feeding grounds with Evening Grosbeaks. In the week prior to the blizzard, my physical count of the grosbeaks rose to 64. On the day of the blizzard, the grosbeak flock was significantly larger, conservatively in excess of 100.

Common Redpolls are closely related to siskins and goldfinches Their Genus is “Carduelis,” deriving from the Latin for thistle, a favorite food of these birds. The “poll” of the redpoll comes from Middle English “pol” meaning head, as in taking a poll or “counting heads.” Hence redpoll means “red head.” As you may guess, redpolls are circumpolar and were known by the British long before the British found their way across the pond. John James Audubon called this bird the Mealy Redpoll Linnet, but could discern to difference between it and the Common Redpoll which he met in northern Europe. 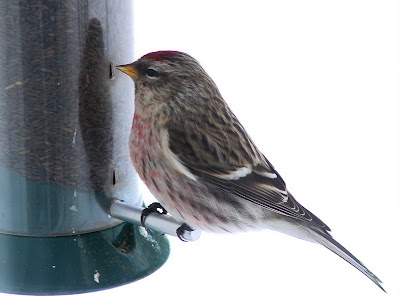 Forbush wrote of the redpoll, “This little wanderer drifts into the most northerly of the United States every winter in considerable numbers, but rather irregularly as far south as the latitude of New York City ... They come with the snowflakes out of the dun sky of November and leave as spring approaches. They are such hardy, boreal birds that probably they leave the northern wilderness in great numbers only when driven south by lack of food.”

There was no lack of food in my feeders during the late December blizzard. 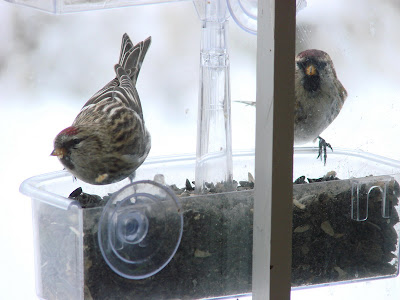 As the blizzard swirled snow outside my window, I was warm and cosy on the inside. One of the delights of living in rural Vermont is being able to take winter in stride, accepting it as a normal part of living with changing seasons. Before the storm arrived, many neighbors canceled plans and headed toward the frozen ponds for a last bit of ice skating while the ice was still snow free. And as the storm ebbed, they canceled work; fresh deep powder is a time for snow shoes, cross country skis, sleds and saucers. I feel sorry for the people crowded in the cities who view a winter storm as a massive inconvenience that interferes with their plans. They yell at politicians for not making it go away immediately. Where I live snow is an opportunity, not a problem. I took the opportunity to watch the redpolls that came with the snow. 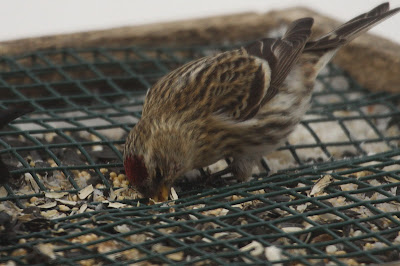 Arthur Cleveland Bent began his “Life History” of the Common Redpoll with the context in which they are often seen: “When the cold air masses of winter extend their fronts into our northern tier of states, a period of welcome surcease from the storminess of the seasonal transitions descend upon regions within their influence. During this month or more of calm the days scintillate and begin to lengthen, and the dwellers of the northland, human as well as wild, come out of hiding to enjoy the sun and the cold, dry air. These are among the most beautiful days in the northland; the temperature hovers between -10 and -20 F; there is no wind, and a great silence lies upon the winter barrens. From the distant spruces that dot the valley slopes like stubble come ... the occasional rattle of redpolls, sounds so faint that you must hear them repeated to feel sure that the sound is not coming from your own lungs.

“... To those who have not visited the northland, the redpolls remain erratic winter visitors; they rarely go south of the 40th parallel. They are rare in many years, but are sometimes abundant, often occurring then in large flocks, the members of which may be alternately wild and delightfully tame.”

Of all the winter finches, the redpoll is my favorite. Good birding!

I have never seen the redpoll here in Virginia. Thanks for the great photos and information.

A bird I have yet to see... gorgeous.

What a most enjoyable experience for you and your grandson! So many beautiful redpolls to see. A pleasure to view your wonderful photos and great narrative!

Thanks for your essay and delightful photographs.
I've got a flock of redpolls feeding enthusiastically just outside my kitchen window in Mosfellsbær just outside Reykjavík. The ground's been snow-covered here for a few days now ...

Thanks for the wonderful description of your Redpoll flock's arrival! Here in Westminster West, Vermont it was the cats who awakened us to the chaos at the feeders... we have had a large flock all winter, up to perhaps 80? Photos on flickr (search photographer name "putneypics")